🔎 Coming of age: The future of decentralized finance 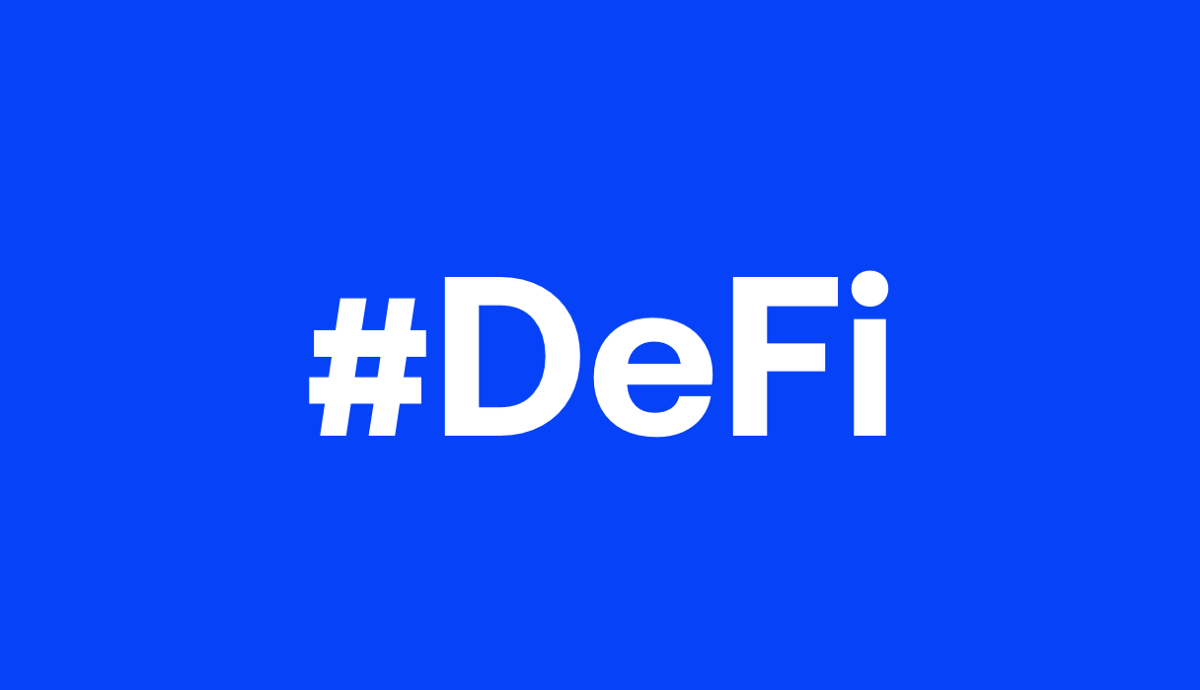 Decentralized finance - yet another solution looking for a problem, truly the future of finance, or something in between? Let's have a sober look under the hood of a crypto enthusiast's darling industry and try to assess whether the buzz warrants VC attention in 2021 and beyond.

Below is the shortened version. For an even more in-depth look, head over HERE.

Decentralized finance can be somewhat of a slippery term to grasp. I'd say the most fit-for-purpose definition is the one that industry news site Binance offers:

"DeFi may be defined as the movement that promotes the use of decentralized networks and open-source software to create multiple types of financial services and products. The idea is to develop and operate financial DApps [Decentralized Applications] on top of a transparent and trustless framework, such as permissionless blockchains and other peer-to-peer (P2P) protocols."

In theory, DeFi applications utilize the inherent capabilities of the underlying blockchain infrastructure - although objectively, some of those advantages do not materialize in this current iteration of the market.

Some of the most popular live DeFi use cases, and personal highlights below:

Industry beat writers have been quick to herald this as a sign that "mainstream adoption" of the space is just around the corner.

I think that is very far fetched if not flat out false. It's much more the sign of an overheated, and highly inefficient, market-driven by "yield farming"; the behavior in which traders constantly move tokens around to benefit from arbitrage opportunities on different exchanges and networks. Vitalik Buterin, the founder of Ethereum, hit the nail on the head on that problem.

All in all, does this warrant the buzz around decentralized finance? Anyone looking at the market clear-eyed today must confess that the answer should be no. However, the state of the market today might not be indicative of its future potential.

A major criticism of DeFi and blockchain in a wider context has been, since the inception, that it solves a problem that doesn't exist. Here are two major issues that I believe DeFi has the potential to actually solve:

Inclusion has been a central idea in the DLT-space ever since the Bitcoin whitepaper in 2008. I believe DeFi applications can provide a major push to include 'everyone' in the financial system. Interestingly, the World Bank estimates that of the 1.7bn unbanked, 1.1bn have access to a mobile device and could access financial services if offered the opportunity. Services run on legacy architecture will have a hard time reaching those people because the infrastructure to serve the unbanked is often not available.

That's underscored by the observation that most of the services that target the unbanked nowadays are peer-to-peer services. Decentralized finance was built both on the internet and on a peer-to-peer basis by default which makes the adoption easy everywhere you have an internet connection. DeFi might just be the next logical evolution.

I've honestly been genuinely disappointed by a majority of Fintechs that have made big waves in recent times. Financial innovation is very centered on the notion of "take something where incumbents provide a terrible experience and move it online while ditching most of the legacy infrastructure". Don't get me wrong - Neobanks are great. Mobile trading apps are also great. Sending money across borders actually works largely frictionless now, at least in some countries.

I believe that blockchain infrastructure has the potential to supplement, if not replace, the legacy banking infrastructure that was never built to last into the internet age. "The currency of the internet" can open up new ways to conduct finance in ways that are not possible with existing infrastructure. I think an early sign could be 'IoT-enabled' payments between interconnected machines. On a production line, for example, continuous messages might be sent to 'the network' on production progress. That might trigger logistics processes and payouts based on observed speed and passed quality requirements of the manufactured good. The sheer complexity and frequency of micro-transactions could catapult some DeFi applications into the spotlight.

Financial innovation can be facilitated through a combination of factors:

This framework should spawn true financial innovation in 2021 and beyond.

Five takes on the future of the industry

1. 2021 will see the most promising DeFi applications yet...

I believe the most promising DeFi applications will hit the market somewhere in early 2022 after being built largely in stealth mode. This might also be the last chance for investors to enter into the wider crypto market at somewhat reasonable valuations. I agree with Naval Ravikant's statement on yet another great appearance on the Tim Ferris Show that investors thinking about joining the market now have already missed the optimal timing by at least a couple of years.

However, 2021 will see the hottest DeFi applications being built yet - a16z's Chris Dixon and Eddy Lazzarin, whose firm has collectively been extremely bullish on crypto for a while now, have visualized an absolute intuitive correlation between innovation and market craze (the entire article is well worth the read):

A period of market craze is usually followed by a "crypto winter" in which the most promising start-ups are created. I think it's pretty safe to say at this point that we are currently in the midst of the fourth hype cycle with asset prices soaring to all-time highs in early January. While crypto assets will likely settle at a higher average price than before, I'm certain that a sharp correction will follow.

I also believe this to be a good thing. As showcased by a16z, some of the most promising applications have been built in those heated markets. The DeFi space in general really took off - MakerDAO's first whitepaper for example was published in late 2017 but only really took off in the subsequent years. Its stablecoin DAI still remains one of the most instrumental coins in the DeFi space.

2. ...but DeFi will only truly take off once it's not reliant on Ethereum.

Interoperability is the key enabler to watch in the industry. In this context, interoperability defines the ability to exchange messages and/ or assets across multiple distinct blockchains. The general idea encompasses specialized chains tailored to the specific use case. Transactions cross-chain should be as seamless as transactions on-chain for DeFi to really take off. Chain interoperability is paramount for mainstream adoption. Ethereum's Vitalik Buterin laid out the technical foundations back in 2016and those still hold today.

Most of DeFi today runs on Ethereum with the aforementioned stablecoin DAI as the most widely adopted token of exchange. I don't believe that this is sustainable. The vision is that every asset should in theory be accessible to trade on any chain in the wider network. Otherwise, the industry just replicates digital silos - just in a novel way. Even with the emergence of Ethereum 2.0, the reliance on one network inhibits the potential of the industry. It makes transactions slower, more expensive, and prevents innovation through the lock-in on one platform.

I think the industry requires a concentrated effort of moving away from Ethereum - or at least expanding way beyond it. I'm particularly excited about Polkadot, established by Ethereum Co-Founder Gavin Wood together with Robert Habermeier and Peter Szaban. They are more well-known today than they were in early 2019 when I first had the opportunity to speak with them in the context of a research paper on chain interoperability. The idea of connecting multiple chains will be a central one for DeFi going forward. Others working on this include Cosmos, Fusion, or Wanchain.

3. The first DeFi unicorn will emerge in Africa.

Bringing disruptive innovation on an infrastructure level into a financial field that is characterized by strong regulation and embedded legacy systems in the western world will take time. The current live use cases reflect that quite well - speculators have understood that DeFi is a better casino than Wall Street at this point in time - 24/7 uptime, little regulation, ample arbitrage opportunity, higher yield, more risk. Will that market environment breed a unicorn that survives its infancy? Probably not. I believe the regulatory risk is too high for VCs to really double down on backing start-ups trying to re-create the financial system on-chain in the 'developed world' - for now anyway. The controversy surrounding FinCEN's proposed new regulation illustrates the struggle that lies ahead in the West. (For the curious, here is a16z's open letter as a response)

Bringing decentralized finance to the second most populous continent on earth is a much better bet. There is a major business case for financial inclusion on the continent and the environment seems favorable for DeFi adoption:

4. DeFi will not make a dent in replacing the developed world's legacy infrastructure this decade but will provide a major extension.

Learning from Facebook's Libra fiasco, FinCEN's regulatory Christmas present and the [EU's crypto regulation proposal](https://www.sygna.io/blog/what-is-mica-markets-in-crypto-assets-eu-regulation-guide/#:~:text=The European Commission's Regulation of, all member states by 2024.): as long as there is no substantial interest from a consortium of incumbents at stake, new approaches will be struck down citing security risk, the potential of fraud, and scalability concerns. But good to know anyway that EU regulation will be ready in its first iteration in 2024.

Therefore, the most impactful DeFi applications of the decade in the 'developed world' will bridge traditional and decentralized finance. Incumbents are showing interest and are increasingly taking action to get a share of the pie. Or just to ensure survival, really. Crypto.com and BCG Platinion find that 58% of surveyed financial institutions fear a competitive disadvantage of DeFi applications in the future if they miss the train leaving the station now. That makes sense - the most promising applications operate on the fringes of their businesses for now but quicker access to loans, insurance contracts, derivatives trading, and asset management could create such a pull that even protective regulatory bodies will move quickly to find solutions for official approval.

Collaboration with the incumbents will be the coming of age moment for the DeFi community - it goes against an ideal that is engrained into the general mindset of the community that the current system is beyond broken and must be replaced. However, if they do show a willingness to work together with both regulators and incumbents, they might yet achieve more in mature markets than they ever could by running a contrarian approach.

DeFi applications have so far received the benefit of "a technical shroud" where applications that feel complicated and techy are actually preferred by early adopters. Since the scene's origin is in the hacker and cryptography sphere, that approach worked well for building out the early infrastructure. However, applications being built in 2021 must adopt user-centric design at their core. The industry must also do better publicity for its own sake - less technical terms; more focus on design, solutions; simple messaging; less talk about abstract world disruption.

Coinbase is arguably the most successful crypto platform out there although their business model is the absolute antithesis to decentralized finance - the platform is as centralized as it can get and its transaction fee system is more reminiscent of legacy banks than Fintechs in the trading space, e.g. Robinhood or German equivalent Trade Republic. But they have succeeded in opening up the crypto world to newbies by taking out the complexity of the space. Decentralized exchanges, like uniswap and especially the recently very popular Curve, should look to replicate that style.

Crypto enthusiasts will not drive the next iteration of DeFi - they are already using it. I believe there are promising products out there already but they are missing a layer of abstraction from the technical foundation to appeal to even the majority of tech-savvy users before being ready to "cross the chasm" and break into the mainstream market:

Become the smartest person in the room